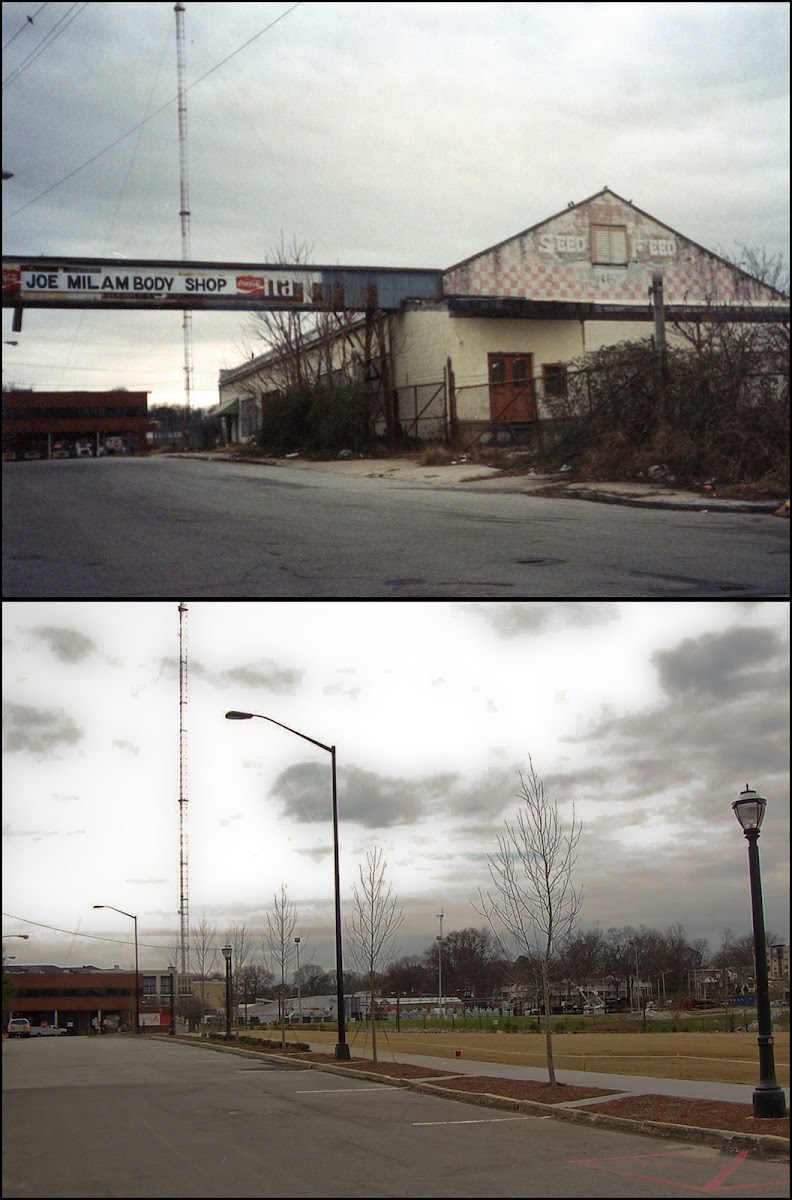 In the 1980s I was intrigued by this forlorn industrial building with the Hee-Haw feed store paint job and psychedelic lettering. It seemed destined for demolition so I took this photo on a dreary January day in 1989. Amazingly, the building stood for almost another 20 years until it was demolished to make way for the new Historic Fourth Ward Park. The site of the park, adjacent to the old Southern Railway "Decatur Belt", had primarily served as an industrial area since the late 1800s. Most of the industries had moved out by the 1970s and a few of the properties were converted into restaurants, night clubs, and live theaters. This particular building was located on North Angier Ave. between Dallas and Morgan Streets just south of the Sears Building and Excelsior Mill / Masquerade. It was once a bottling plant for May's Beverages and in the late 1970's became the home of Kelly's Seed & Feed Theatre, which presented live stage shows. The theatre closed in the mid 1980s and, judging from the sign, subsequently saw use as a body shop. It was abandoned when I took the photo in 1989.

Here are a couple of photos of the Seed & Feed Theatre from the Georgia State University Library Digital Collections . The title of this first one reads "Steve Lindsley, Tom Cullen, and John Wittemore on the roof of Kelly's Seed & Feed Theatre, Atlanta, Georgia, 1979?" 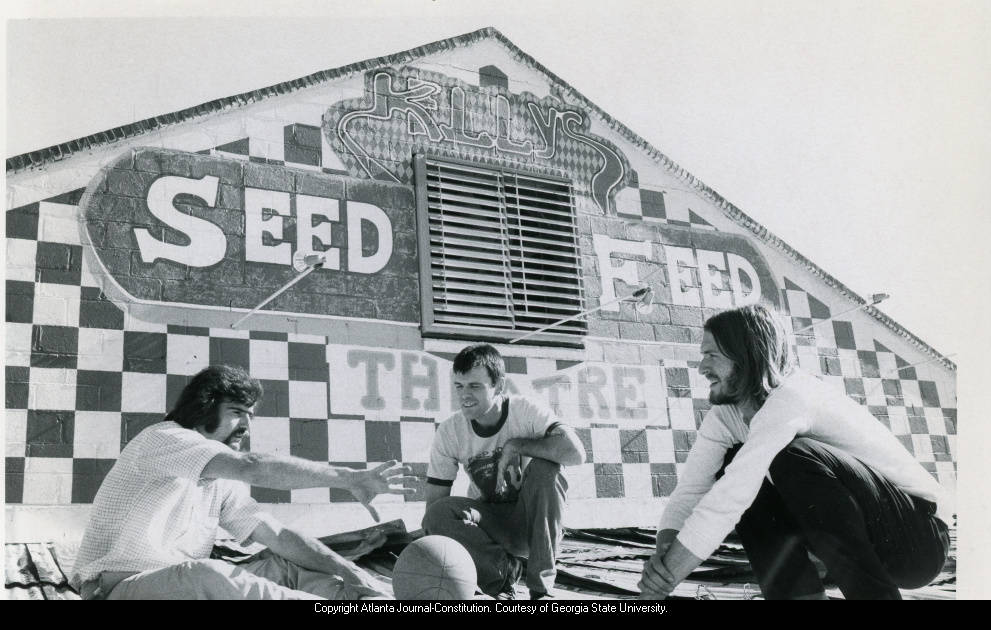 The caption for this one is "Three Magi, from "The Play of Herod", Kelly's Seed & Feed Theatre, Atlanta, November 1983." 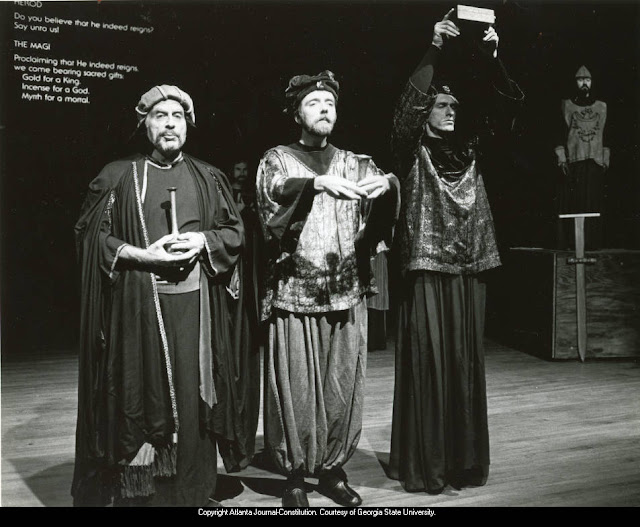 This is the view facing north on N. Angiers on beautiful autumn day in 1997. The May's Beverages sign was still clearly visible decades after the bottling plant closed. The same view in January 2012: the industrial area has been replaced by the Historic Fourth Ward Park. Ironically, when I returned on a strangely warm 70° January day, the place was more lifeless and deserted than ever. 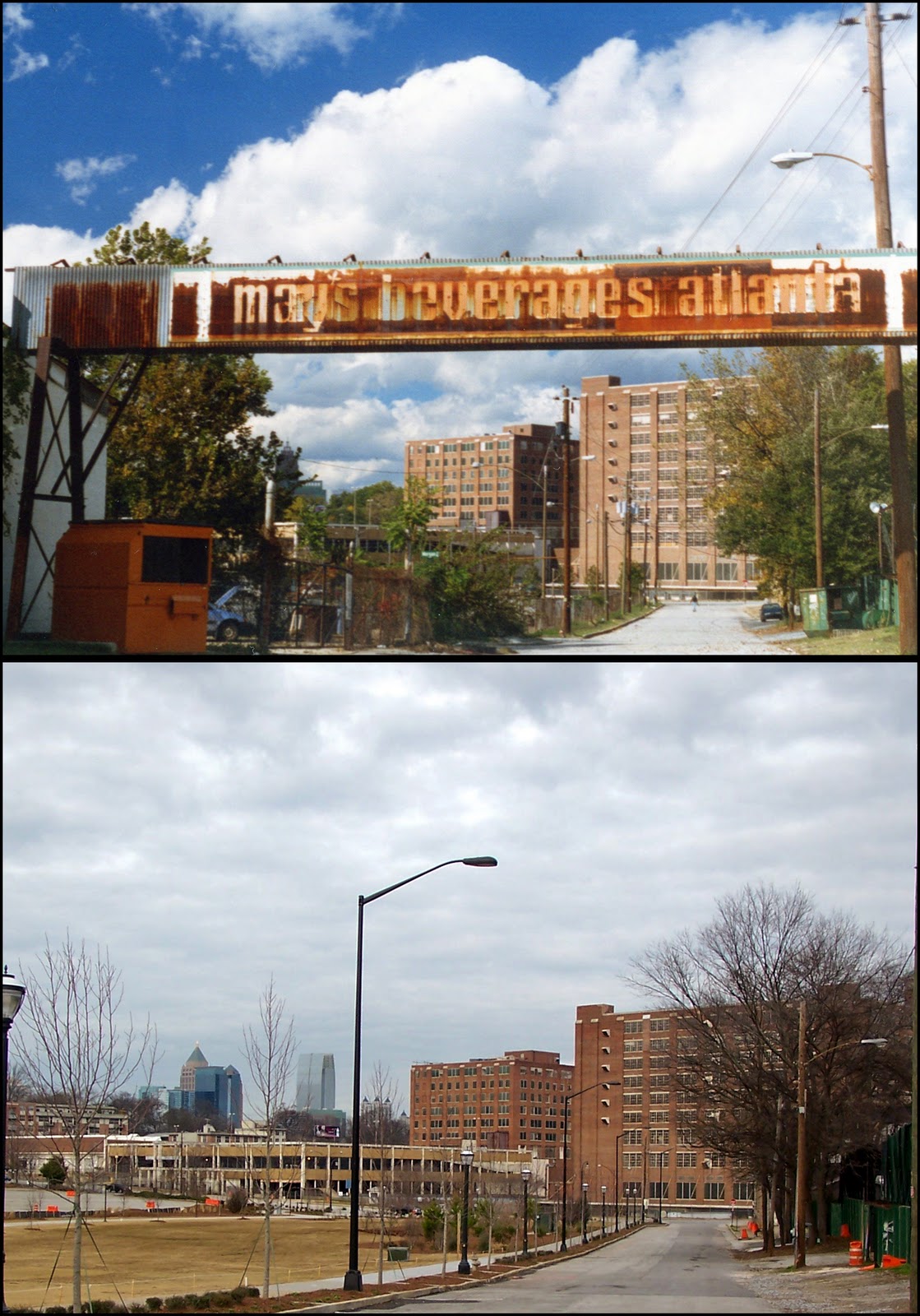 I found this interesting history about May's Beverages over at Bottlebooks.com: May's Beverages-Atlanta May's Bottling Company, 544 North Angier Avenue N. E. Atlanta, was a division of American Associated Companies Incorporated. May's originally was a bottler of Mil-Kay, Bireley's & Topp Cola in Atlanta, and was in business from around 1932 to 1972. In 1962/3 decision was made to change name to May's Beverages-Atlanta, May's Bottling Company, at which time they switched to primary bottling of "May's chocolate flavored drink", the bottling division was discontinued in 1972. They had a United States Patent for the unique way of pasteurization they used in the bottling of their chocolate drink.

Google Map of this spot: