East of the ATL: Then and Now

I noticed my photo comparison of the site of the old Lithonia, GA railroad depot has been making the rounds on several blogs and thought I'd point readers to the entire set of photographs. Entitled Now and Then: East of Atlanta, the set features recreations of vintage photos taken in Decatur, Stone Mountain, Lithonia and Conyers, GA. Some of the original shots are nearly a century old! If you enjoy this blog and are a fan of the Atlanta Time Machine, you'll probably dig these too.

This was the view facing south from the Virginia Avenue bridge over the Norfolk Southern railroad on November 26, 1995. The old Sears building, aka City Hall East, dominates the horizon. 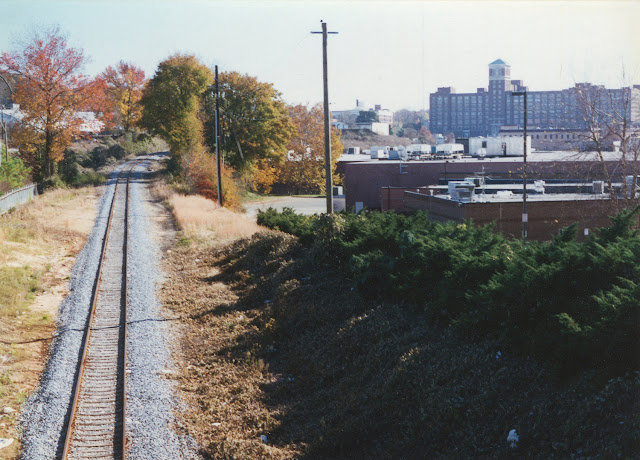 17 years later, the railroad is long gone and the Atlanta BeltLine construction is underway. As with most of my BeltLine photos, I plan to take a third photo after construction is complete. For a view from the other side of the bridge, click HERE. 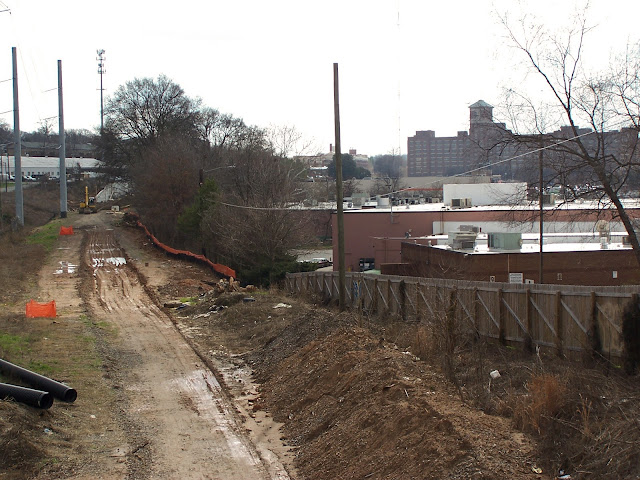 This aerial photo from 1949 shows the extent of the industrial infrastructure that once existed along the railroad at Virginia Avenue and Monroe Drive. (Monroe runs north to south on the left side of this photo). The white arrow shows the location and the orientation of the above photos. 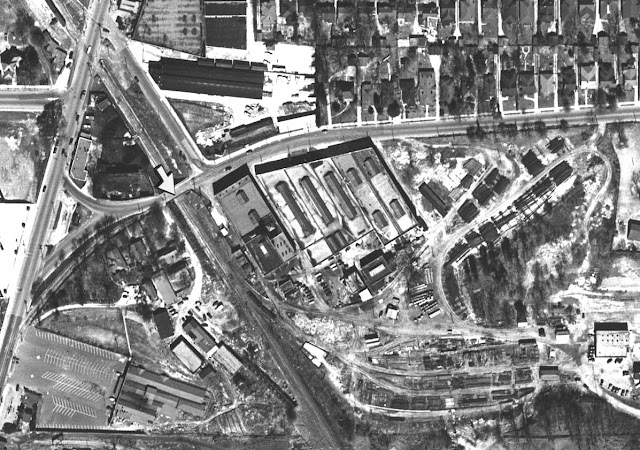 Google map of this location:

I'm the guest on this week's episode of Out There Atlanta, a weekly podcast covering food, arts, events, and people around town. I joined the lovely and engaging host Lilly Lampe at the Krispy Kreme on Ponce and, fueled by caffiene and sugar, rambled a mile a minute about my photography project, growing up in Atlanta, the virtues of Super8 film and the story of Sinead the Mannequin. Lilly even plays a song I wrote at age 15. All of this and more can be yours by clicking HERE 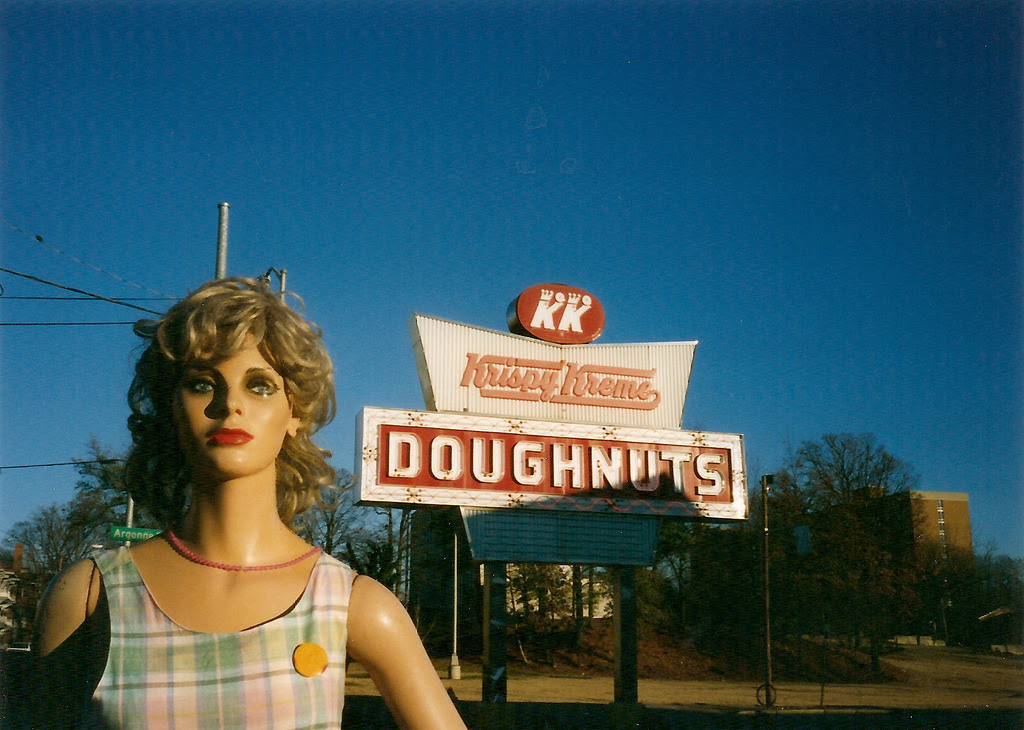 These two photos were taken from the Virginia Avenue bridge over the Norfolk Southern "Decatur Belt" which is now being redeveloped as the Atlanta BeltLine. The top photo was taken on a gorgeous autumn afternoon, November 26, 1995. The second one was taken on a slightly dreary winter morning in February 2012. The railroad crossing seen here is (or was) at Monroe Drive. Piedmont Park is just beyond that and the skyline of midtown is in the distance. I'll come back to get a third photo once the BeltLine is complete. 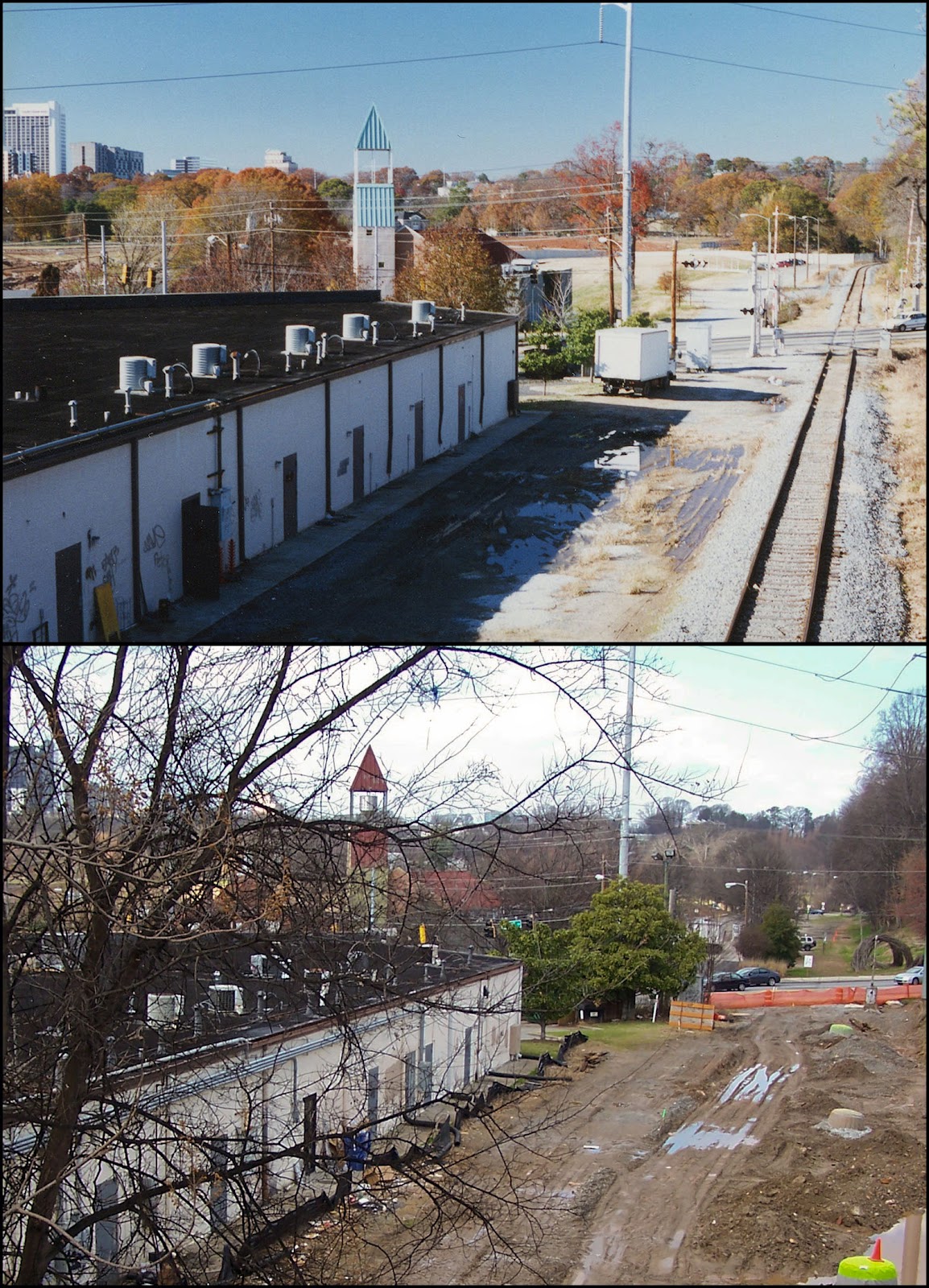 I've been told many times that animated gifs annoy people, so at the risk of annoying you, here are the same two photos superimposed and animated.

This is a combination of two photos of "unidentified" locations from the Atlanta History Center that were taken in February 1971 just a few yards from where I took the above photos. (Note to the AHC: for a small fee I'd be happy to identify the locations of your photos!) This is looking down Kanuga St. towards Monroe from Virginia Ave. The railroad ran parallel to Kanuga and is to the left of the road in this shot. As you can see, the midtown skyline consisted of a single skyscraper in 1971.

Google map of this location: